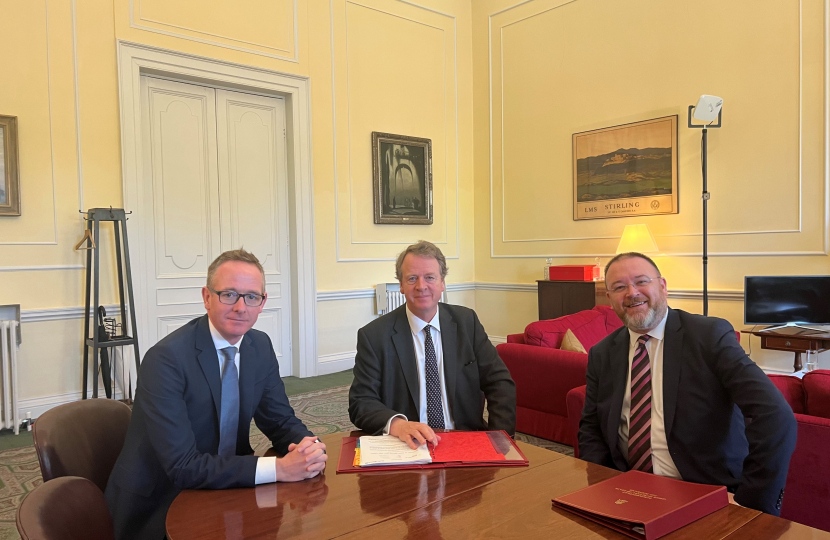 Secretary of State for Scotland, Alister Jack, met with John Lamont MP today to discuss the extension of the Borders Railway. He told the Borders MP that he understands the importance of the project to people in the Borders.

Mr Jack, who was reappointed to his role by the new Prime Minister yesterday, said that he is committed to the feasibility study as set out in the Borderlands Growth Deal signed last year.

He also told Mr Lamont that he will urgently speak with his colleagues in government to push the study forward.

As part of the £450 million package for the Borderlands area, £10 million was allocated by the UK and Scottish governments to proceed with ‘work to assess the benefits and challenges of extending the Edinburgh – Tweedbank Borders Railway to Carlisle’.

Mr Lamont set up the meeting with the Secretary of State after it appeared that there was a bureaucratic blockage stopping the study from starting.

The meeting was also attended by David Duguid MP, Parliamentary Under Secretary of State for Scotland.

“I am continuing to apply pressure on both the UK and Scottish governments to get on with this work to extend the Borders Railway.

“This was a positive meeting with the Secretary of State where he reaffirmed his commitment to the Borderlands Growth Deal and £10 million package for the Borders Railway extension.

“He told me he will press this issue directly with the new Transport Secretary and hopefully get things moving as quickly as possible.

“It is important that we do not lose any more time with this. Communities along the railway line, like Hawick and Newcastleton, need this important investment now.”