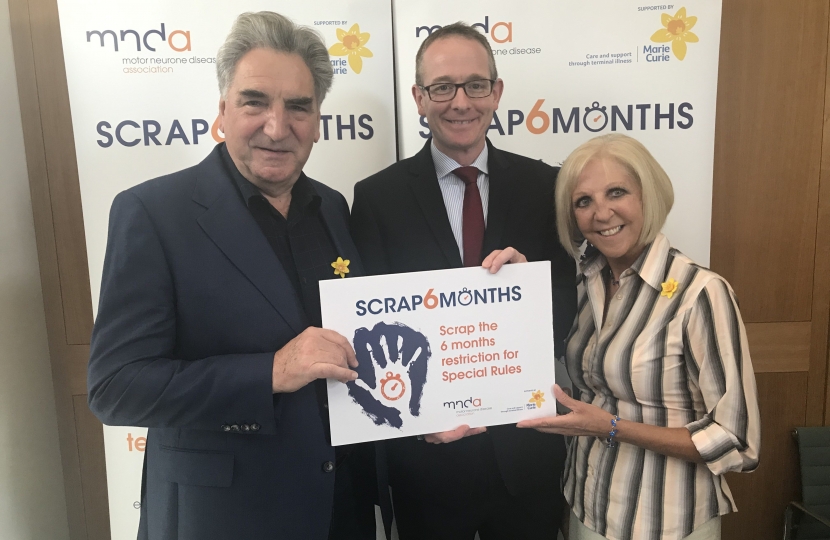 The UK Government has announced a review into how terminally ill people access benefits in response to a charity campaign.

Last year the MND Association and Marie Curie launched the Scrap 6 Months campaign to push for a change in the law that will enable more terminally ill people to get quicker access to benefits.

Currently someone is only considered terminally ill if there is a reasonable expectation of having six or less months left to live.  The campaign calls for this arbitrary time limit to be scrapped and for doctors to be able to determine whether a person is terminally ill. The current law means that people with complex and unpredictable terminal illnesses, such as motor neurone disease, sometimes miss out on benefits.

In response to pressure from charities and MPs, the Department for Work and Pensions has announced a review into how people with terminal illnesses access benefits. The review will include a consultation with charities and claimant representatives.

The law has already been changed in Scotland for benefits which are administered by the Scottish Government, thanks to amendments put forward by Scottish Conservative MSP Jeremy Balfour.

John Lamont MP, who has been a backer of the Scrap 6 Months campaign for the last year, has welcome this review.

John Lamont MP said: “People coping with the impact of a terminal illness should not be forced to jump through hoops in order to access the financial support they urgently need. The current law is outdated and needs to be changed.

“I have raised this issue numerous times with the Department for Work and Pensions. I also supported legislation in Parliament seeking to improve the system, so I am pleased that we are moving in the right direction with this review.

“Chances are, we all know someone who’s been affected by a terminal illness, so it’s absolutely crucial that we make sure that anyone facing such a difficult time gets all the care and support they need, when they need it.

“This issue can particularly impact on people with MND, a disease which everyone in the Borders knows about in light of Doddie’s brave campaign.

“I think this is an issue on which the UK Government has got it wrong, which is why I’m backing efforts to get the law changed as quickly as possible.”