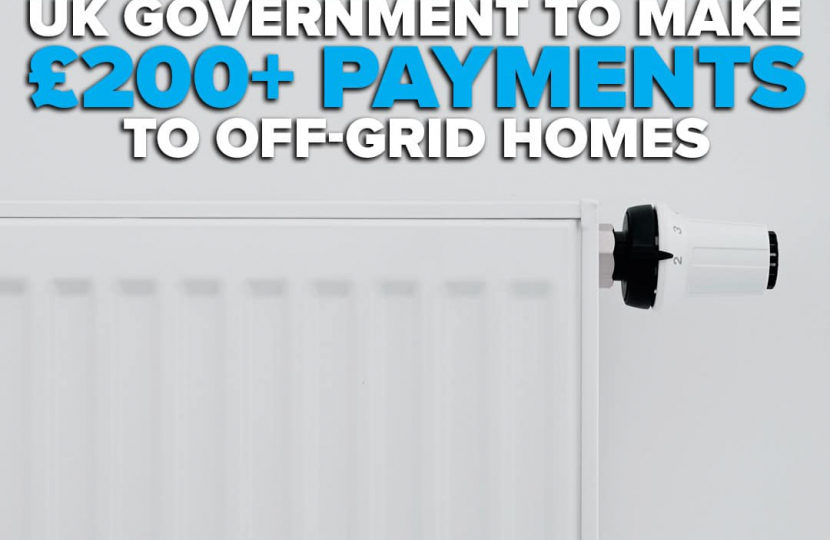 Scottish Borders MP John Lamont has urged local people who use alternative heat sources to apply for hundreds of pounds of financial support after the UK Government announced details of a new scheme.

On Monday, the UK Government said applications will open in January for the scheme, which will provide £200 for people who use heating oil, and up to £400 for households who don’t have a direct supplier.

Online applications will open in January for households in Scotland who are eligible for the £400 Energy Bills Support Scheme Alternative Funding to submit their details, alongside a helpline for those without online access.

Payments to households that meet the eligibility criteria – including people who get their energy through a commercial contract or who are off-grid – will be made by Local Authorities in Great Britain.

This is likely to include care home residents, residents of park homes; tenants in certain private and social rented homes, homes supplied via private wires; residents of caravans and houseboats on registered sites, farmers living in domestic farmhouses, and off-grid households.

To make the process as simple as possible for consumers, those who are eligible for the Energy Bills Support Scheme Alternative Funding will need to submit a short online form via the Government’s gov.uk pages, with the application portal due to open in January.

As well as discounts provided through the EBSS and Alternative Fuel Payments, the government’s Energy Price Guarantee (EPG) will save a typical household in Great Britain around £900 this winter, based on what energy prices would have been under the current price cap – reducing bills by roughly a third.

Scottish Borders MP, John Lamont, said: "Many households across Scotland rely on alternative heat sources, and it's vital that they too get the help they need to pay their bills this winter.

“Those who use heating oil will receive £200 toward their costs. Nearly a million households across Scotland, England and Wales can apply for £400 towards their bills if they don't have a direct supplier - people who live in very remote communities, for example.

"If you are eligible, or think you know a family member who might be, I'd urge you to apply online and get the financial assistance you are due to help during these challenging months."