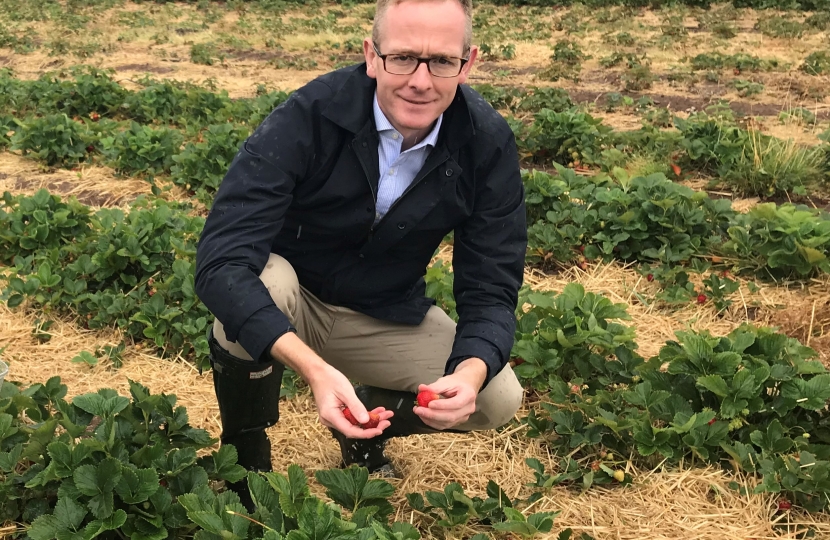 The UK Government has announced that the number of visas available for next year’s fruit and vegetable pickers will increase to 30,000.

The 30,000 visas allow those who want to come to the UK to work on farms for a period of up to six months.

The workers will play a vital role in helping fruit and vegetable growers pick and package their produce in 2021.

The UK Government had said that 10,000 visas would be available but Douglas Ross, leader of the Scottish Conservatives, told the Prime Minister that more were needed.

Similarly, Borders MP, John Lamont, pressed the Home Secretary on the issue last week in the House of Commons.

The extension in the number of visas has been welcomed by the National Farmers Union of Scotland.

The scheme now gives particular recognition of the need for additional seasonal labour in Scotland to support local rural economies and the renowned soft fruit growers.

The UK Government has a long history of helping farmers and growers get the seasonal workers they need. Since the end of WW2, similar schemes for Seasonal Agricultural Workers have welcomed migrant workers into the UK.

“In the Borders and across Scotland, farmers produce fruit and vegetables of the highest quality. The expansion of the seasonal workers scheme is great news for farmers up and down the country.

“It is great to know that growers have the backing of the UK Government to get their produce onto supermarket shelves and create jobs. They work hard all year round to ensure that we always have fresh produce.“

“These measures will provide vital labour, both domestic and from abroad, to our farmers and growers to help gather the 2021 harvest to feed the nation.”

“NFU Scotland welcomes today’s announcement that there will be a Seasonal Worker Scheme allowing 30,000 workers from outside the UK to undertake vital seasonal agricultural work.

“The significant upscale of the Seasonal Worker Scheme from 10,000 to 30,000 permits has been hard won. Following close and supportive dialogue with government and MPs, NFU Scotland welcomes this increase on the understanding that the EU Settlement Scheme will allow workers who have undertaken work on Scottish horticulture farms prior to 2021 to return. And following the major, industry-led effort to recruit domestic workers during the 2020 pandemic, growers will continue to utilise all tools to encourage as much recruitment from within the UK as possible in 2021.

“We look forward to working with government to establish the terms and operation of the scheme in terms of cost for employers and which operators will be licensed to operate.”