Ruby and Beetle banner goes on display on the A68 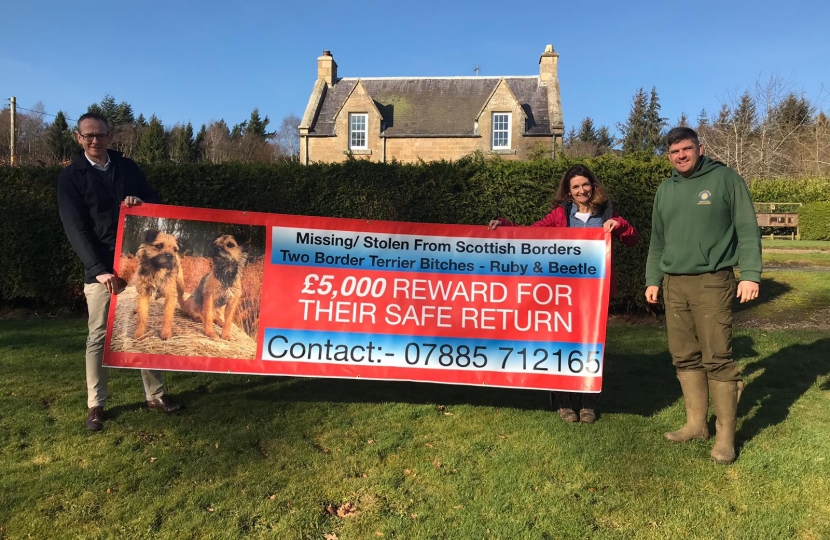 The thousands of motorists who use the A68 each day will now start noticing a new sign has appeared.

The banner, which has been put up by Georgie and Edward Bell, is seeking to raise awareness about their stolen Border Terriers, Ruby & Beetle.

Edward Bell, head gamekeeper at Lothian Estates and his wife, Georgie Bell, had their two Border Terriers Ruby and Beetle stolen on Friday 28th December.  It has now been more than 60 days since the two Terriers went missing.

The Bell family have raised a significant amount of money through social media as a reward and their Facebook page now boasts nearly 6,000 followers.

As well as the banner, the couple have arranged a dog walk at Bamburgh Beach in Northumberland on 10th March to highlight their campaign to get their beloved dogs back.

Local MP John Lamont visited Georgie & Ed before the banner was put up, to speak about their case and offer his support.

Commenting, John Lamont MP said: “Losing a loved pet is clearly an incredibly difficult time for any family, but the Bells are doing themselves proud by how hard they are working to get their dogs back.

“I wanted to take some time to pay them a visit to offer my advice and support, but Georgie and Ed are doing everything they can to find Ruby & Beetle. They need help spreading the word from everyone in the Borders, particularly on social media.

“The new banner looks great and it is in an ideal location.

“I am concerned that this highlights an even wider problem with people and vans coming up to rural areas like the Borders to steal whatever they can find.

“It’s an issue I know the local police are concerned about and it clearly isn’t just about taking farm equipment.

“If anyone knows anything about these dogs, I’d encourage them to get in touch with Georgie and Ed or to simply call Police Scotland.”

Georgie Bell added: “Ed and I would like to thank everybody for their continued support for the Missing Ruby and Beetle Facebook Group.

“We look forward to seeing as many people as possible at Bamburgh Beach on Sunday March 10th at 11am to raise awareness to help find Ruby and Beetle and the plight of Stolen Dogs across the UK.

“We are working on spreading their missing profile in Ireland and Wales, places where we haven’t seen much coverage, and don’t think we have many following.

“We are desperate to find them and bring them home.”

As part of the UK Government’s commitment to levelling-up opportunities across the UK, more disadvantaged students in the Scottish Borders will now be able to take part in the Turing Scheme.