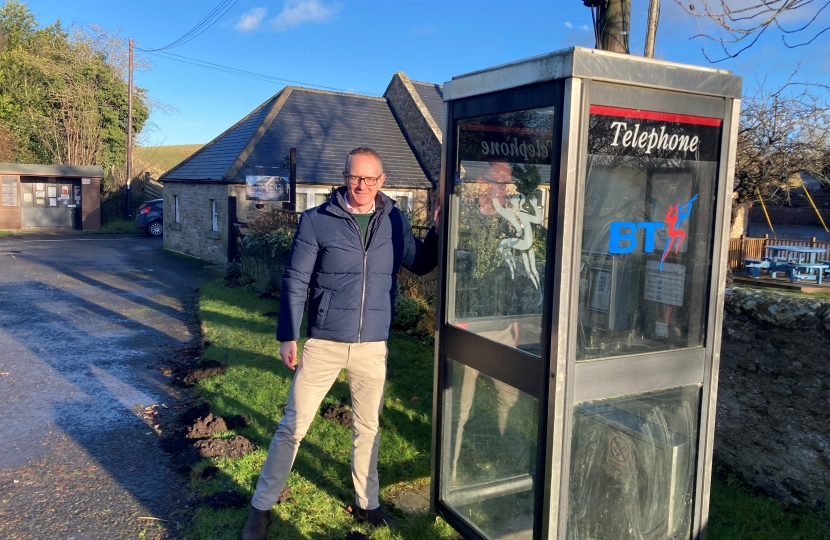 Proposed plans by Ofcom, the telecommunications regulator, would see local authorities like Scottish Borders Council lose a veto over the removal of phone boxes.

The proposed criteria to protect public call boxes would be where:

It is understood that most phone boxes in the Borders would not meet these criteria and be removed.

Therefore, Mr Lamont has responded to the consultation asking that they adopt existing Scottish Borders Council criteria for retaining public call boxes, which takes into consideration:

·       The quality of mobile phone coverage in terms of access to all main mobile phone networks in an area (using the Ofcom mobile coverage web site).

·       Usage in terms of more than one police and other emergency services calls i.e.101/999/111 calls based on information provided by Police Scotland and BT

·       Closeness to the coast or a fresh water location that is considered high risk.

·       Whether the payphone is the final one in a town centre, residential or village community.

The Borders MP highlighted in his response the importance of public phones, especially during emergencies like Storm Arwen.

“Storm Arwen ripped out the ability of many Borderers to communicate, with no phone service and no electricity to charge their mobile.

“Phone boxes provide a backup in these situations when people need to phone the emergency services for help.

“I know that lots of people will not have used a phone box in years, and no doubt many young people have never used one. But they remain a vital part of our phone network.

“If Ofcom decides to remove the veto of local authorities, then we must do all we can to strengthen their criteria for retaining the public call boxes.

“Scottish Borders Council already has a very effective set of criteria that they have applied locally, and I think these should be adopted by Ofcom nationally.

“I have made these points very clear in my consultation response.”

"Rural phone boxes still have a role whilst some areas - like the box 20 yards from my home in a remote Berwickshire village remain mobile not-spots and are close to recreational routes.

“Storm Arwen showed just how fragile our communications are. The odd analogue phone still worked when mobile masts were out of power, fibre broadband was dead and power cut all telephony.

“Ofcom now has a great opportunity here to ensure that all rural communities that need it get a community connectivity hub with an updated phone box with a reserve power supply which could be a lifeline in remote areas and for those travelling through them.

“Scottish Borders Council has always made a robust case to retain such vital infrastructure, we now ask that it be updated to be able to respond to the challenges our infrastructure clearly faces and I welcome support of our MPs to help make that case to Ofcom.”

The winning design was a snowman made from recycled paper from previous artworks.