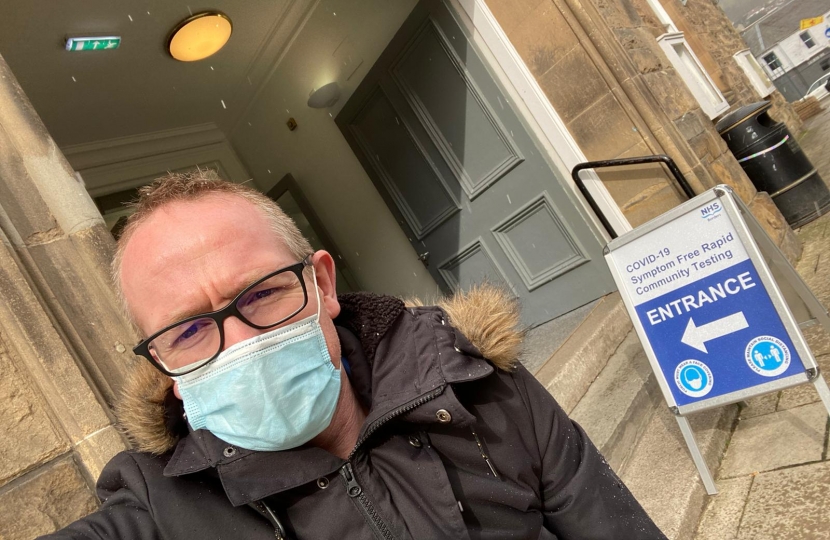 Borders MP, John Lamont, has urged local residents to make use of the asymptomatic Covid-19 testing regime being rolled out by NHS Borders.

Mr Lamont got a test at Galashiels Volunteer Hall over the weekend after NHS Borders asked locals to come forward to be tested.

Testing at these sites is only for those who are well and not displaying any Covid-19 symptoms.

The health board is touring the Scottish Borders with the help of Scottish Fire & Rescue and the British Army.

“The Scottish Borders has one of the lowest Covid-19 rates in the UK at the moment. That doesn’t mean to say that the virus is not spreading.

“NHS Borders say that almost a third of cases of Covid-19 occur in people who do not have symptoms of the virus. So you might have it but not know it. To stop the spread, it is important that people get regularly tested.

“And it is important that politicians don’t just preach about getting tested, but actually go and do it themselves too.

“That’s why I went to Galashiels Volunteer Hall at the weekend to get tested. Thankfully, I tested negative!

“The process was easy and the service from the team there was friendly and efficient. After taking my test I received my result by text within half an hour.”

“There are teams out across the Borders over the coming days and I strongly urge Borderers to visit their local testing station to help keep their communities safe.”