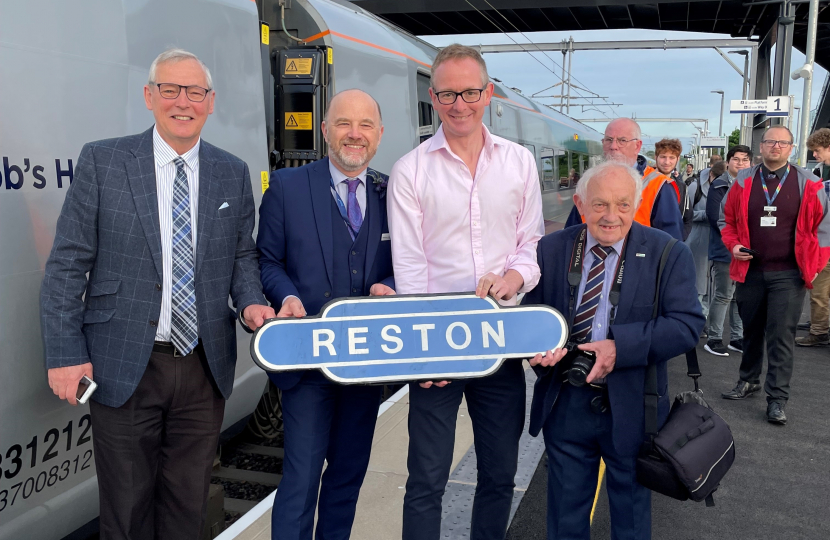 The Transpennine Express service from Reston marks a new era in public transport for Berwickshire, which is now connected to towns and cities across the UK on the East Coast Main Line.

Mr Lamont has campaigned for Reston station to be reopened since 2004. He relentlessly campaigned for the return of rail services to Berwickshire during his time as the local MSP at Holyrood and continued this campaign after his election to Westminster as the area’s MP.

“This is a momentous day for Reston and for the campaigners who have worked so tirelessly to see the station reopened.

“It was both a proud and emotional sight to see the first train roll into the station this morning. I was delighted that I was able to use the first service to take me to London for another busy week in the House of Commons.

“We must pay tribute to people like Barrie Forrest, Tom Thorburn and the entire team from RAGES (Rail Action Group East Scotland) who have dedicated so much of their time to reinstating a station here.

“Similarly, we should note that this project would not have got off the ground if Scottish Borders Council had not contributed £3million of their budget towards the construction costs.

“Personally, I have campaigned for the re-opening of this station since 2004. It was a campaign which I relentlessly pursued after my election to Holyrood as the area’s MSP in 2007 and have continued as Berwickshire’s MP at Westminster.

“Today is the beginning of an exciting new beginning of transport connectivity in Berwickshire and the Scottish Borders.”