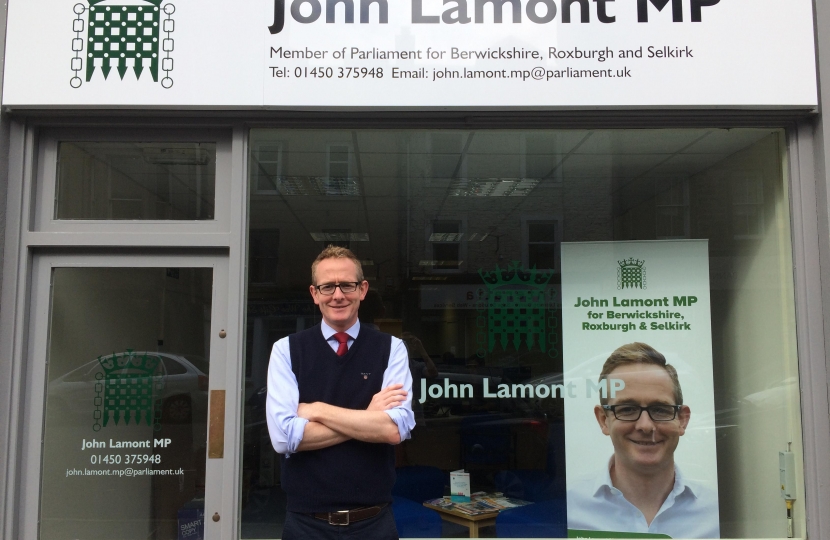 Local MP John Lamont has marked a year into his new job by starting his 2,000th constituency case as a Member of Parliament.

On the 8th June 2017, John Lamont was elected as the new MP for Berwickshire, Roxburgh and Selkirk, the first time the area had a Scottish Conservative representative at Westminster for 53 years.

Since then, the MP’s office in Hawick has helped with more than 2,000 cases, an average of nearly 40 a week. These cases cover a huge range of problems from broadband issues, to potholes, to antisocial behaviour and visa applications. Many involve more than one constituent, meant the number of people who have been in touch with John will be significantly higher than 2,000.

During this time, John Lamont has also held more than 140 advice surgeries in all parts of the Scottish Borders, as well as a number of street and supermarket surgeries.

In Westminster, John has been appointed Vice-Chair of the Scottish Affairs Committee and Co-Chair of the All Party Parliamentary Group on Broadband. He has spoken in 62 debates, above average amongst MPs and has represented the Borders in 93% of votes, well above average. He has also fulfilled his promise to put the Borders ahead of party politics by calling out decisions made by the UK Government where he felt it necessary to do so.

Commenting, John Lamont MP said: “My incredibly busy and experienced team in Hawick have been working hard over the past year, getting through nearly 40 cases each and every a week.

“While I’m not always able to get the outcome people want in every case, most of the time constituents are happy with the end result and I never turn people away or pass them off to someone else. I’ve also kept up my regular advice surgeries, which give constituents the opportunity to meet with me face to face.

“I said when I was elected that I would continue to work hard for the Borders and promised to be accessible to my constituents. I hope that I’ve lived up to this promise in the last year.

John added: “In Westminster, I will continue to stand up for the things that matter to my constituents, support local businesses and organisations and remain Scotland’s most accessible MP.

“During the election campaign, I promised to put the Borders ahead of party politics. I’ve not been afraid to do just that and have criticised my party on key issues where I’ve felt they have got it wrong, including very publicly on fishing and on the RBS branch closures.

“As always, I’d encourage anyone who has an issue or a concern to get in touch with me via email, by contacting my office in Hawick or by coming along to one of my advice surgeries.”