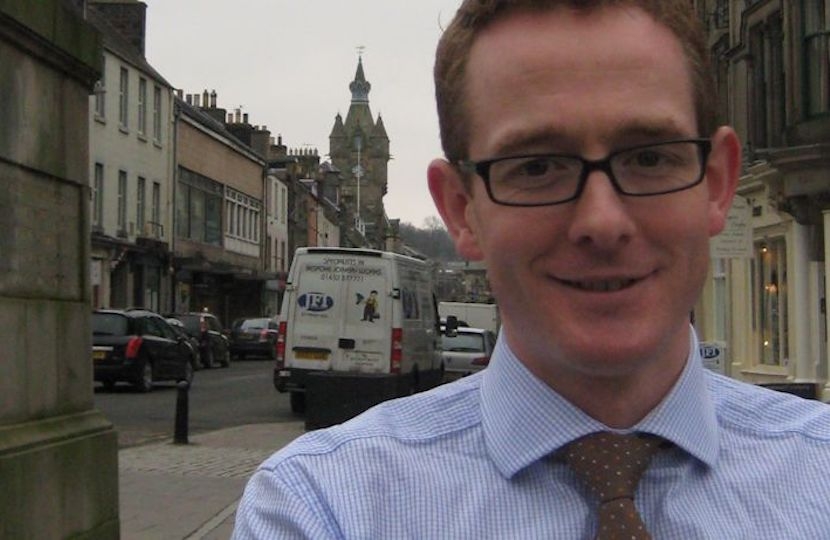 Local MSP John Lamont has slammed the SNP Business Minister for ignoring what should be a “blindingly obvious case” for an Enterprise Zone for Hawick.

John Lamont first suggested an Enterprise Zone for Hawick back in February, following the closure of Hawick Knitwear. Frustrated with the lack of progress, he lodged a Parliamentary Question asking the new Business Minister what consideration he had given to the idea.

After waiting nearly two months for a response, the Minister, who as a South of Scotland MSP also represents Hawick, admitted no work had been done and claimed there was currently little evidence this approach would benefit Hawick.

This is despite the obvious success of Enterprise Zones south of the Border. Since being set up in 2012, the UK Government’s Enterprise Zones have supported 635 new businesses, attracted over £2.4bn of private sector investment and created nearly 24,000 jobs.

An Enterprise Zone for Hawick would offer a range of incentives to any new business looking to move in to or expand in the town, including business rates relief, fast track planning applications, the prioritisation of high speed broadband, specific skills and training support and advice for businesses on international growth.

John Lamont MSP said: “I first called for an Enterprise Zone for Hawick back in February and I’ve been astonished with the lack of progress from the SNP on this.

“This latest response from the Business Minister beggars belief. Either he is unaware of the blindingly obvious evidence in favour of Enterprise Zones or he is choosing to ignore the evidence because Enterprise Zones are a UK Government idea.

“Even just a cursory glance at what is happening south of the border shows how successful Enterprise Zones can be for struggling town centres. In the 9 Zones in the North of England, over 8,000 jobs have been created since 2012. Investment has flooded in to the region at a rate of over £1m per day.

“Even if only some of this success was replicated in Hawick this would be a massive boost for the town.”

John added: “The Minister has asked for some evidence that Enterprise Zones would benefit Hawick. I am happy to provide that evidence for him. Now is the time for the Scottish Government to take some meaningful action to benefit Hawick.”