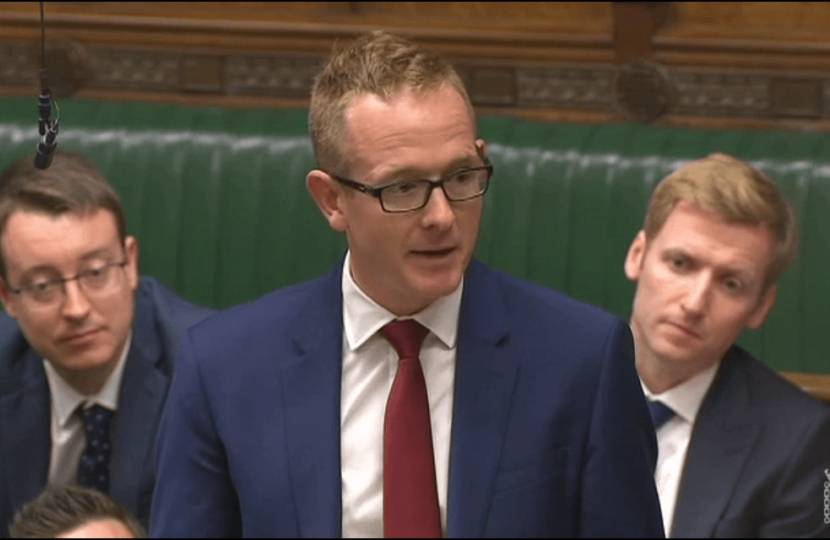 Local MP John Lamont has praised the contribution the Polish community make to Borders life, in a speech in the UK Parliament.

As part of a Westminster Hall debate led by Conservative MP for Shrewsbury, Daniel Kawczynski MP, John spoke about the important historical ties between the Borders and Poland and called for securing the rights of Poles who have made a life here to be a priority in the ongoing Brexit negotiations.

Noting the physical examples of this shared history: the Great Polish Map of Scotland near Peebles and the statue in Duns of Wojtek the beer drinking member of the Polish Army, he praised the contribution of the 1,300 Polish speakers who are based in the Borders.

Speaking after the debate, John Lamont MP said: “I was keen to take part in this debate to promote the close links we have in the Borders with Poland.

“These links are based on a shared history stretching back more than 70 years to the Second World War. These days, Polish speakers living in the Borders contribute immensely, work hard and bring some cultural diversity to our area.

“I know there is some concern amongst Poles living in the UK about their future, but it’s important that we make it clear that EU migrants who have made a life here continue to be very welcome. One of the first things being discussed in the Brexit negotiations is securing the rights of these families and I am confident this will be concluded soon.”

The full text of John’s speech was as follows:

I congratulate the hon. Member for Shrewsbury and Atcham on securing this important debate today. I understand that the focus of today’s debate is on the future, but I hope I will be forgiven for using this debate as an opportunity to promote the shared history which my constituency has with Poland as well.

Of course, representing a Scottish constituency, I’d have preferred the title for this debate to have been British-Polish Relations, but I’ll forgive the hon. Gentleman for this oversight.

Because there is a strong link between Scotland and in particular the area I represent in the Scottish Borders and Poland. After the fall of France in May 1940, the 1st Polish Armoured Division was established in Duns, in my constituency. The division trained in Berwickshire before taking part in the Normandy landings. After the war and the Communist take-over in Poland, many of the Polish soldiers in the West were unwilling to return, where their personal freedom was far from assured and so many settled in the UK, including a relatively large number in the Scottish Borders.

This link can still be seen today in the Great Polish Map of Scotland, the brainchild of Polish war veteran Jan Tomasik, who lived in Galashiels and helped to create what we think is the world’s largest terrain relief model near Peebles just outside my constituency.

Another famous Polish migrant was Wojtek, the Beer drinking, cigarette eating, ammunition carrying Brown Bear who was officially enlisted to the Polish Army and fought in the Italian Campaign before being stationed near Hutton in Berwickshire. In Duns, which is twinned with the Polish town of Zagan, a statue of Wojtek was unveiled by the Major of Zagan last year following a blessing by a Polish priest. The statue stands as a reminder of the important link between our communities.

To this day, there remains a sizeable Polish community in the Scottish Borders, around 1,300 according to the most recent census data. Their contribution cannot be overstated: they work hard, integrate well and add some cultural diversity to the Borders. Hawick’s Saturday Polish School, which offers courses to Polish and English speaking adults, is a great example of a community doing well integrating while also maintaining and promoting their own culture.

I know there is some anxiety amongst this community about their future as the UK leaves the EU and ensuring that Poles continue to feel welcome here is an absolute necessity. I am pleased that securing the rights of EU migrants is one of the first priorities of the negotiations and I look forward to this being resolved quickly and to the satisfaction of all.

Looking to the future, there is much we can do to improve and build upon the special relationship the UK has with Poland. As one of the fastest growing economies in the EU and one of our key allies, Poland will have an important role to play in the forthcoming negotiations.

I am encouraged by the establishment of annual bilateral summits between the two countries and that the first of these took place last year.

The focus should be on pursuing the measures agreed at this meeting, particularly a defence cooperation treaty, and further work to strengthen industry cooperation and small business growth in our two countries.

It is clear that Poland recognises that just because we are leaving the EU, doesn’t mean that our important trade and defence links are compromised.

I am confident that our relationship will strive to ensure that that relationship continues to be as good and positive in the future as it has been in the past.