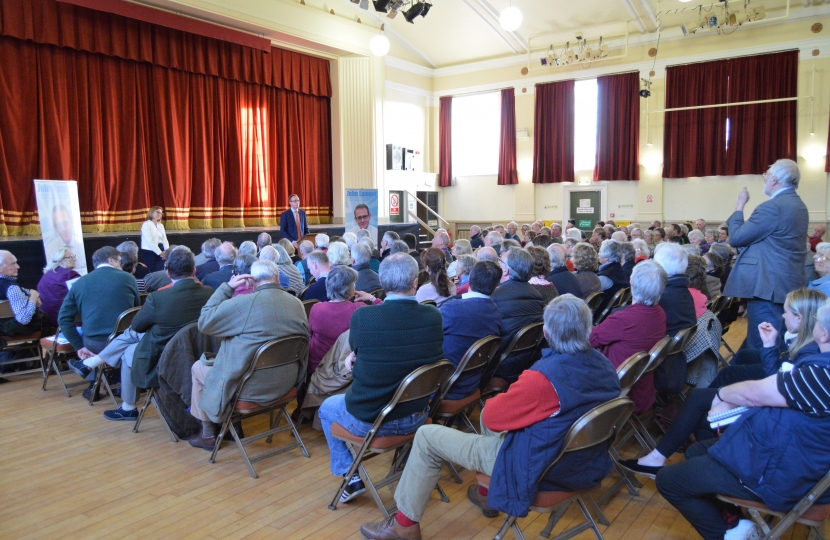 There is no desire to return to the divisions of the past according to those who attended a public meeting arranged by John Lamont MSP in Kelso last night.

More than 200 residents from Kelso and beyond attended the meeting to hear what they could do to help keep Scotland in the United Kingdom.

In response to an unprecedented number of emails, phone calls and messages, John Lamont MSP decided to call two public meetings, one last night in Kelso and the other today (Tuesday 28th March) in Melrose, to alleviate the concerns of Borderers.

The meetings, arranged and advertised in little over a week, attracted a huge number of people wanting to hear what they could do to oppose the First Minister’s plans for separation.

At the meeting, John Lamont pointed out that public opinion was clearly against a second referendum and took questions from the floor on a range of issues. Business owners in attendance said the continued uncertainty was putting off investment, while many residents said they wanted the Scottish Government to focus on improving public services.

Speaking to a packed room of over 200 attendees in Kelso’s Tait Hall, John Lamont MSP said:

“This is a really important point because the nationalists are trying to claim Scotland wants another vote, when that is simply not true. Support has not increased. Indeed, according to the opinion polls immediately after the big announcement of a second referendum from the First Minister, there was actually a drop in support for independence.

“There should not be a referendum when there is no political or public consent for it—not when we were promised by this First Minister that another referendum would not take place for a generation; not when we were told that it would not happen without a change of opinion; and not when we know that it will cause more division and more uncertainty for our country.

“The Borders voted overwhelmingly in favour of the UK back in 2014 and - if anything - is moving towards a more firmly pro-UK position.

“The impact of leaving the UK would be hardest felt here in the Borders, where people regularly travel and work south of the border. The SNP’s intention to pursue a separate immigration policy and to be pursue membership of the EU internal market means a hard border is inevitable. Putting up barriers between us and our largest market, makes no sense and it would be a disaster for businesses and residents in the Borders.”