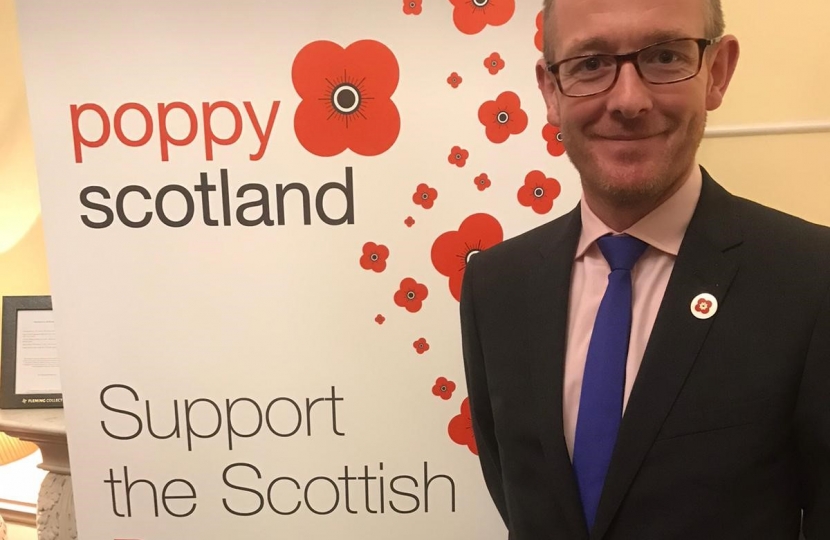 Local MP John Lamont has urged Borderers to back this year’s Poppy Scotland appeal by volunteering their time for the charity and by buying a poppy.

John Lamont MP attended the launch of this year’s Poppy Scotland appeal at Dover House, home of the Scotland Office in London.

The charity helps thousands of ex-servicemen, women, and their families overcome physical, emotional and financial difficulties and also helps fund organisations that deliver specialist services in areas such as housing, employment and mental health.

Five million poppies are distributed across Scotland by an army of volunteers who ensure that poppies and tins are displayed in shops, businesses and schools. Poppy Scotland has issued a call for people to volunteer their time this year to ensure the annual appeal continues to be a success.

An aim of the appeal this year is to ‘Light Up Red’ as many buildings and landmarks as possible across the UK. Dover House was lit up red for the launch of the Poppy Scotland Appeal yesterday.

John Lamont MP said: “Poppy Scotland does some fantastic work in helping ex-servicemen and women after they have left the armed services. With support groups set up throughout the country, they can provide counselling and support to those who need to adjust to life outside the Army, Navy or RAF.

“For their appeal this year, the Charity is seeking to ‘light up red’ as many buildings and landmarks as possible. The Borders does the country proud every year with some fantastic poppy displays and so many poppies being worn. I am sure that people will be getting involved this year too.

“However it’s important to remember that the Poppy Scotland appeal can only take place if supported by a huge team of volunteers. I’d encourage people in the Borders to volunteer if they can – it’s a really rewarding experience.”