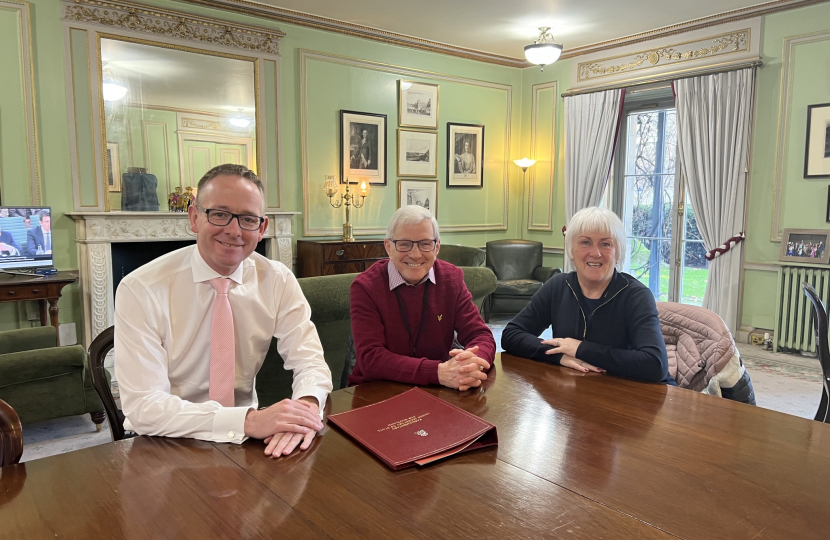 John Lamont MP and local rail campaigners have held discussions about the next steps for the potential expansion of the Borders Railway to Hawick, Newcastleton and on to Carlisle.

The Scottish Borders MP held “positive and productive” talks with Marion Short, the chair of the Campaign for Borders Rail and the chair of Hawick Community Council.

They discussed the next steps for the Campaign for Borders Rail, what progress had been made and what still had to be achieved.

The Campaign for Borders Rail is a pressure group promoting the benefits of modern train services for communities across the Borderlands.

Their grassroots campaign was instrumental in reopening the rail link from Edinburgh to the Scottish Borders.

The group is now aiming to see the Borders Railway extended to Hawick and Carlisle.

“We focused our discussion on the feasibility study that we hope to see work start on very soon.

“We also discussed delays and hold-ups from the transport departments of both governments.

“The Campaign for Borders Rail is grateful for all support.”

Scottish Borders MP, John Lamont, said: “It was very useful to hear the latest updates from the Campaign for Borders Rail.

“We are all hopeful that real progress can be made over the coming months and we can start to see developments.

“Better rail services would be a fantastic boost to people across the Scottish Borders and I will continue working hard to deliver improvements to the local transport network.

“Thank you to Marion for her time and for all the tireless campaigning she does on behalf of local people.”