Huge boost for Borders and Scotland in UK Budget 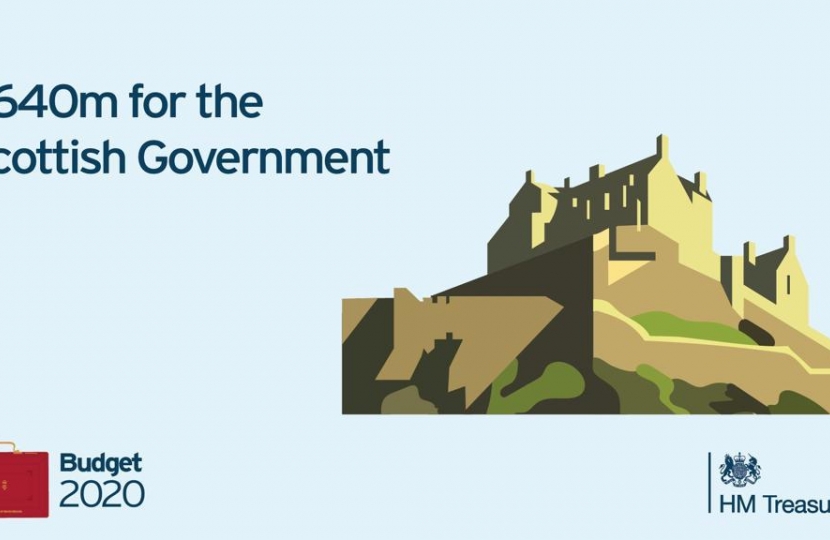 The Chancellor of the Exchequer, Rt Hon Rishi Sunak MP, has delivered his budget which has shown a huge cash boost for Scotland. It also sees a whole host of measures to deal with the Coronavirus outbreak.

Contrary to reports before the Budget, use of red diesel for agriculture has also been retained. This means fuel used by agricultural vehicles will only be charged 11p per litre rather than the 58p per litre for everyone else. There will also be no impact on fishing.

The Scotch Whisky industry will also receive a big boost as a result of a freeze on Spirits Duty, a £1m campaign to promote the wider Scottish food and drink sector, and £10m for research and development into decarbonising UK distilleries.

A planned increase in Beer Duty will also not go ahead, helping pubs across the Borders to stay competitive, whilst keeping costs down for consumers.

Fuel Duty is also to be frozen yet again, meaning that the average driver in the Borders will have saved £1200 cumulatively since 2010.

The Chancellor also announced increases in the National Living Wage, National Insurance thresholds and Employment Allowances, meaning that someone working full time on the minimum wage in Scotland is more than £5,200 better off compared to ten years ago. The increase in National Insurance Thresholds will see 31m people across the entire of the UK receive a £100 tax cut.

A £30bn package of measures will also help the UK deal with any challenges arising from the spread of Coronavirus.

Other measures include the abolition of the so called ‘Tampon Tax’ which could not be abolished whilst inside the EU, meaning 5% VAT is no longer added. VAT will also be abolished for digital products such as ebooks and magazines.

Commenting John Lamont MP said: “The Chancellor has unveiled a wide-ranging package of support for Scotland. With the Scottish Government receiving their biggest increase in funding for a decade, there are now no excuses for the SNP not fully funding our NHS.

“Drivers in rural areas like the Borders are also going to be supported with another Fuel Duty freeze. This means that the average driver here is over £1200 better off than under plans from 10 years ago.

“This is a budget which shows a commitment to our whole United Kingdom and all the nations and regions within it. It is clear that Scotland thrives and benefits from being part of our precious union.”

“I am delighted that the Chancellor has been able to deliver on our promise to scrap the unfair Tampon Tax which would have not been allowed whilst still in the EU.”