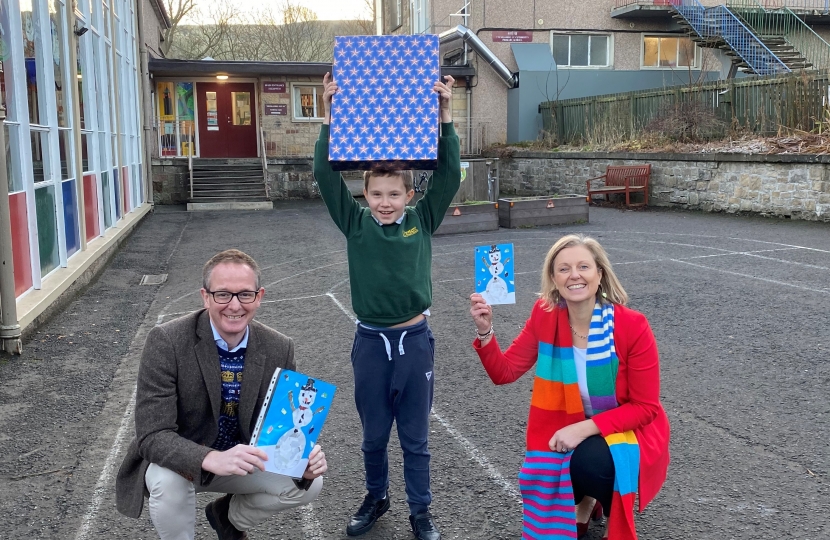 The winning design was a snowman made from recycled paper from previous artworks.

The pupil, who is in P6/7 at the school, was delighted to be presented with a Lego Avengers Helicarrier for winning.

The winning card is sent out to hundreds of households across the Borders, as well as to Her Majesty The Queen, and the Prime Minister.

Two runners up were also named, each receiving a £25 voucher of their choice. They were Harriet Lindsay of Melrose and Dyllan Arnold of Selkirk.

The local politicians presented Eoin with his prize outside of his school in Hawick, as well as the winning card.

The competition was sponsored by Scottish Power who donated the prizes for the winners.

“One of the best parts of my job is to pick the winning design alongside my friend and colleague, Rachael Hamilton MSP, for our annual Christmas card competition.

“Eoin’s design was great and has made a fantastic cover for our annual Christmas card.

“It was a pleasure to be able to present Eoin with his prize. I knew from his teachers that he was a big Lego Avengers fan so we were delighted to be able to get him this.

“Thanks to our sponsors Scottish Power for their generous donation of prizes and making our competition a special one.”

“It was a delight looking through the mail bag of entries we received for our annual Christmas card competition. It was great to see it return this year after we cancelled last year due to Covid-19.

“Eoin is a worthy winner, as were the fantastic runners up. They all really captured the beautiful scenes of Christmastime.

“It was great to see Eoin so delighted with his prize. I loved how he and his classmates had used recycled paper to make their designs.

“Of course, this would not be possible without the support of Scottish Power and I am very grateful for their support.”

“We are all really happy for Eoin and agree his card looks super. The look on Eoin’s face, when he realised he had won, was just magical to see.

“Eoin was absolutely delighted to win this prize but what was even nicer was to see how pleased his classmates were for him. He is a lovely boy with a warm and friendly personality.

“Eoin’s teacher, Mrs Russell, was so pleased that his work was recognised and that he was selected as the winner.

“Thank you to John and Rachel for giving the children the opportunity to participate in this competition.”