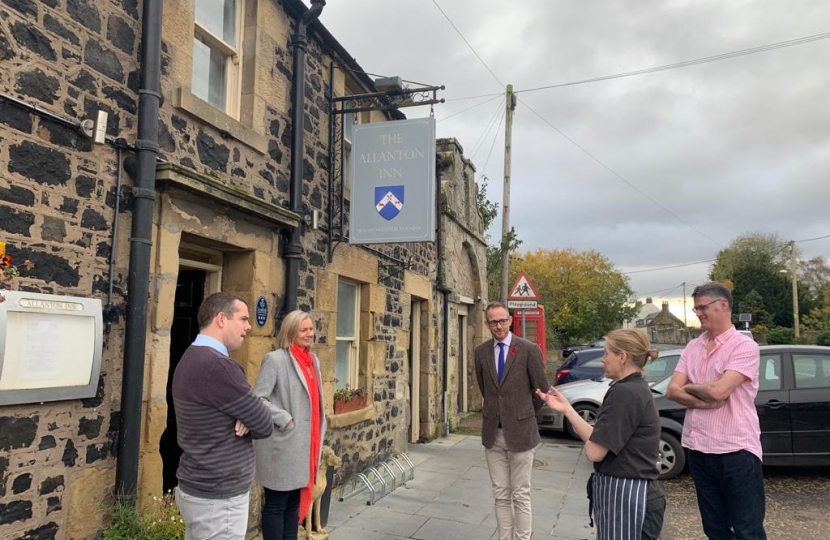 Leader of the Scottish Conservatives, Douglas Ross MP, has visited Borders businesses to hear about how they have been affected by coronavirus restrictions.

Mr Ross wanted to meet with the businesses to better understand what more can be done to support them as restrictions continue.

He met with representatives of the Allanton Inn before visiting the new premises of Eyemouth ice cream maker, Giacopazzi’s.

The difficulties of changing government guidance were discussed as well as how government support packages, including the furlough scheme, have helped protect jobs.

Douglas Ross MP said: “I’ve been out listening to businesses and individuals across Scotland and it was great to hear from those in the Borders as well.

“There are difficult weeks and months ahead for us all, and it is important that the Scottish and UK Governments do everything in their power to support businesses and keep people in jobs.

“The Scottish Government has been given substantial new funds from the Treasury to help businesses deal with the restrictions. It is important they get this out to businesses as quickly as possible.

“Similarly, the UK Government needs to be clear that they will support businesses who have to furlough staff due to any future lockdowns.

John Lamont MP said: “It was great to have my friend and colleague, Douglas Ross, in the Borders to hear directly from businesses.

“It is important that Borders voices are heard as they prepare for the difficult winter trading conditions.

“These current restrictions will be part of our way of life for a while and it is important businesses are given the tools to survive and thrive.”

Rachael Hamilton MSP: “It was fantastic to have Douglas Ross in the Borders.

“He understands rural areas and his message on jobs and economic recovery set out a clear plan for helping Scotland get back on the right track.

“Without a doubt, Douglas Ross is providing the strong leadership we need to fight the next election and save the Union”.