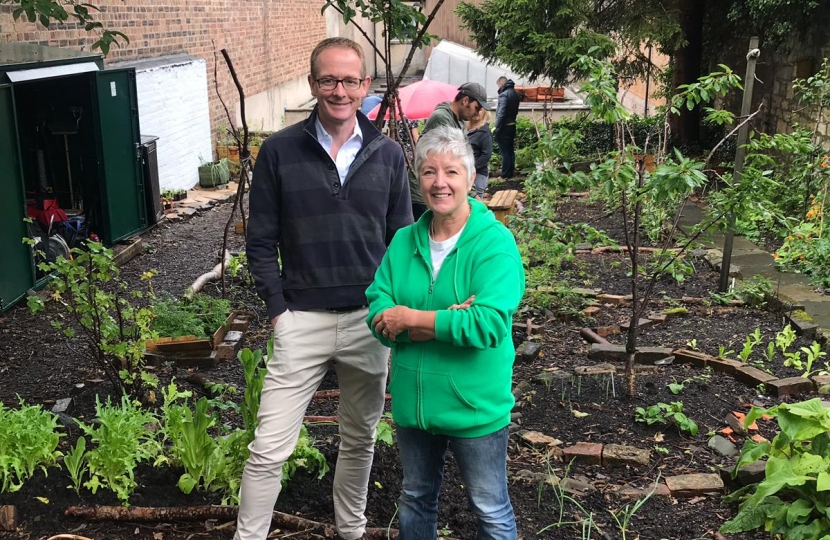 The Member of Parliament paid a visit to the Hawick Community Garden, run by local charity Abundant Borders. One of several community gardens across the Borders, Abundant Borders provide training for people to learn how to grow and cook food in a sustainable and healthy way.

Co-founded by Berwickshire based Karen Birch in 2016, the charity has set up community gardens in Ayton, Hawick and Eyemouth and is looking to provide new community gardens in social housing developments. It is therefore on the hunt for more volunteers to help this happen.

John Lamont MP said: “It was great to speak to the team at Abundant Borders and to visit the Hawick Community Gardens. It’s a fantastic space which is providing a lot to the local community.

“Abundant Borders do some great work, not just in Hawick but across the Scottish Borders. I was really impressed with the way they are trying to join up issues like food poverty with teaching people about growing and cooking their own food.

“The garden is coming along nicely and I’m sure with their new polytunnel even more healthy and sustainable produce will be coming out of Hawick soon.”

Chief Officer at Abundant Borders Karen Birch added: “Food poverty is a big issue here in the Scottish Borders and it was good to have the opportunity to talk to our MP directly and for John to see the work we are doing in Hawick, and across the region.

“Our work in helping to create community gardens, re-connects people

with food growing and gives those who are socially isolated or experiencing difficulties in their lives, the opportunity to re-engage