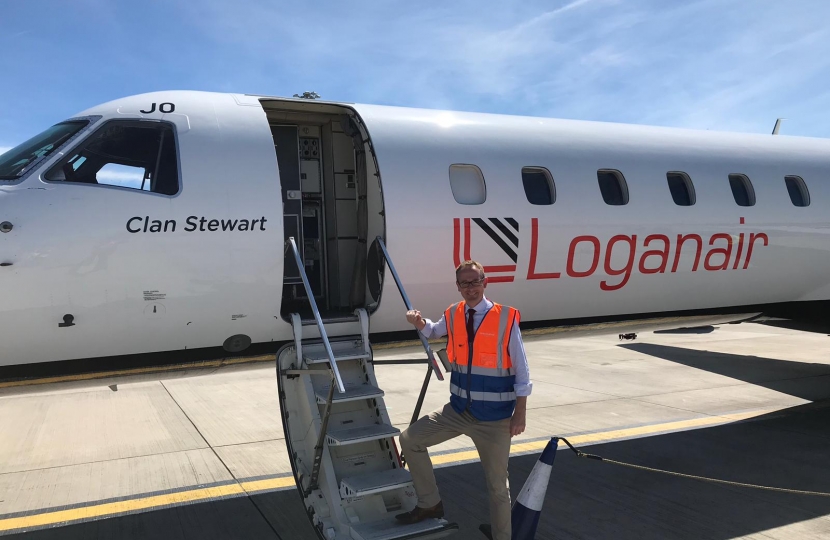 The first commercial passenger flight to leave Carlisle Airport in more than 25 years have been taking off this week.

Scottish airline Loganair will be providing flights to London, Belfast and Dublin.

The site is a former RAF airfield and its last commercial flight was in 1993. It is now owned by the Stobart Group, who refurbished the site by building a new terminal and extending the runway.

Local MP John Lamont was one of the first passengers on a service from London. He has strongly welcomed the reopening of the airport, which he says is an important new transport link for the southern Scottish Borders.

The news comes after it was revealed this week that the Borderlands Growth Deal will include £10m for a detailed feasibility study into bringing the Borders Railway to Hawick, Newcastleton and on to Carlisle. A free bus service will link Carlisle Railway Station to the airport.

“It’s great to have the option of another key transport route so close to the Borders and makes bringing the railway to Hawick and Carlisle all the more important.

“The economic potential for the borders is significant and I hope that this is just the beginning and that more routes are added on soon.

“Following the great news that £10m has been set aside to look at extending the railway. this is a really exciting time for the area.

“I was really impressed with the airport overall and can see it being very popular.”