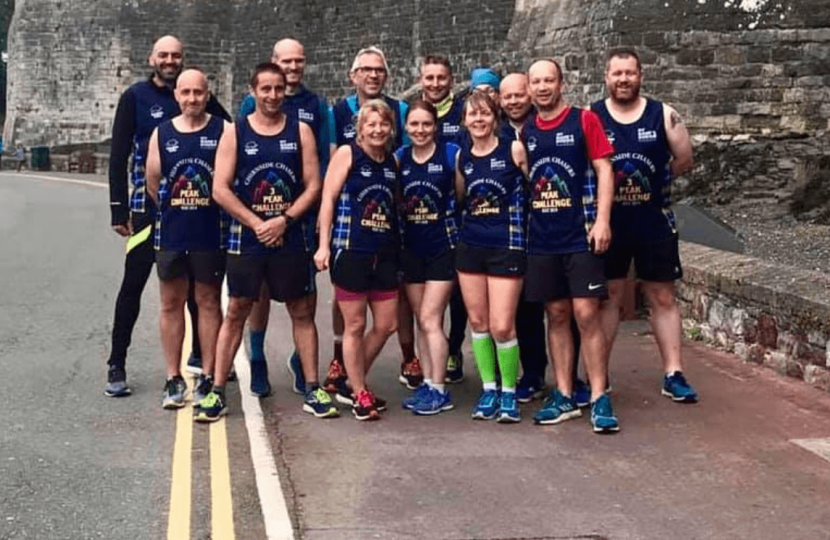 A group of runners from Chirnside Chasers have become record breakers by running up the highest mountains in Scotland, England and Wales as well as the 450 plus miles in between.

The team of 14 runners completed their National Three Peaks Challenge by running 24 hours a day over the bank holiday weekend as a relay. The team were running for a total of 77 hours, 11 minutes covering 462 miles and battling the elements and a lack of sleep.

Runners were supported by another member of the team on a bike, with the rest of the team trying to dry off and get some rest in campervans following behind.

The group from Chirnside, who last year ran from Lands End to John O’Groats, completed this challenge to raise money for the My Name’5 Doddie Foundation.

Local MP John Lamont, who ran 26 miles on the first day and a half of the relay, has praised the team’s “phenomenal” effort and is urging Borderers to support them by visiting their fundraising page.

John Lamont MP said: “Thanks to Stevie and the team at Chirnside Chasers for persuading me to join them for their latest challenge.

“I was only part of the team for the first part of this challenge, but even that was really tough. I was lucky enough to be running through Glencoe in some fantastic weather, but the rain soon set in after than which made everything all the more difficult.

“To keep running, non-stop for so long and to cover so many miles is a phenomenal effort and I hope everyone in the team is hugely proud of themselves. Not only are they record breakers, but they are raising money for Doddie’s Foundation, a fantastic local cause.

“I’d certainly encourage Borderers to take a look at the Challenge’s Facebook page and if you can to donate.”