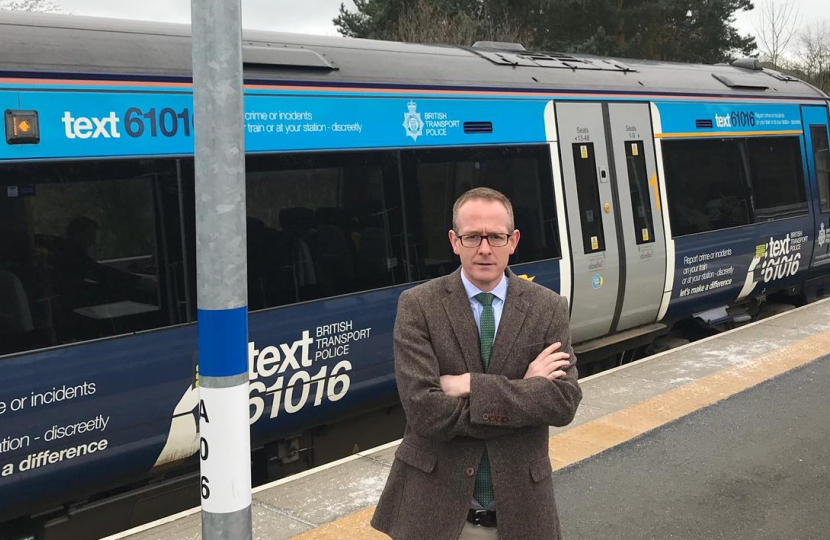 Rachael Hamilton MSP and John Lamont MP have slammed the latest cuts to Borders Railway services, following the nationalisation of Scotrail by the SNP Government.

ScotRail is preparing to announce a raft of cuts to its services, following an announcement by the drivers’ union ASLEF that it will ballot for industrial action over pay.

The daily number of services from Tweedbank to Edinburgh Waverley has been cut from 31 to 15 in the latest shake up of the timetable, representing a cut of over 50%.

Both Borders parliamentarians have criticised ScotRail for failing to provide adequate services, with the reduction in services hitting commuters hard.

Mrs Hamilton and Mr Lamont want SNP owned ScotRail to get back round the table with ASLEF in order to restore a full timetable for the Borders Railway.

“The cuts to ScotRail services will be a huge blow to commuters, who have already had to endure eye watering cancellations and delays over many months.

“I am angered that the revised timetable is lacking adequate services, all of which will have a significant impact on Borders commuters.

“Ever since the SNP nationalised ScotRail in April, the quality of service has deteriorated substantially and it is nothing short of a shambles.

“Constituents regularly contact me rightly concerned at the declining standards of the Borders Railway service.

“The SNP Government’s nationalisation plan has well and truly fallen at the first hurdle.

“As ever, Borderers will have to suffer a drastically reduced timetable due to sheer SNP incompetency”.

“Just weeks ago, I welcomed the return of half hourly services to between the communities in my constituency and Edinburgh. I am extremely disappointed that these services are to be slashed.

“Borderers are right to expect a level of certainty over their transport links with the capital. Since the SNP’s nationalisation of ScotRail last month, they have had anything but.

“For those who rely on these services to get to work every day, visit friends and family, or to access transport links to the rest of the country, cutting Borders rail services once again is a real kick in the teeth.

“These cuts leave no room for flexibility during peak times, when the majority of travellers will now have to cram in to the limited services that remain.

“Today I have written to the SNP’s Transport Minister asking for an urgent meeting.”

As part of the UK Government’s commitment to levelling-up opportunities across the UK, more disadvantaged students in the Scottish Borders will now be able to take part in the Turing Scheme.