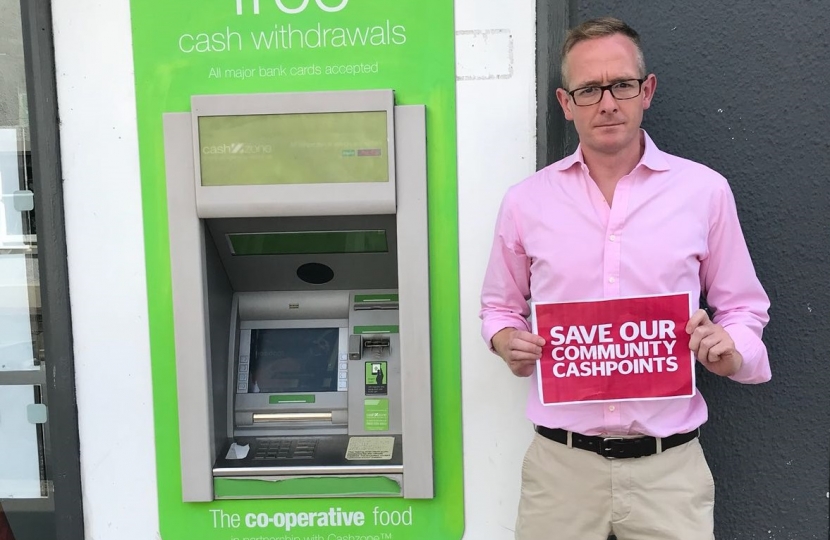 NoteMachine, the UK’s second largest ATM provider have announced it will start charging for nearly half of all its free to use machines in a move which could affect cash machines in Hawick, Jedburgh and Galashiels.

The company plan to start charging for around 300 ATMs a week over a ten-week period, meaning more Borderers will have to pay for the privilege of accessing their own money.

Three NoteMachine ATMs in Hawick, two in Jedburgh and one in Galashiels could start charging in the coming weeks.

Local MP John Lamont has slammed the decision and will be meeting with NoteMachine’s Chief Executive to urge him to reverse the decision.

The company say the move is due to cuts to the fee they receive when people use their ATMs.

Free to use ATMs are paid for by banks who pay an interchange fee to the ATM operator for each use. Link, who run most of the UK’s ATM network sets this fee and have announced they intend to reduce the interchange fee in stages to 20p over the next four years.

NoteMachine plan to start converting around 3,000 of its 7,000 free to use machines to pay to use over a ten-week period and will start with machines with the lowest number of transactions.

The news follows calls from Westminster’s Scottish Affairs Committee for the UK Government to prevent any further reductions in the interchange fee and review how communities will continue to access cash.

John Lamont MP said: “This is really disappointing news that could hit cash machines across the Borders.

“I have spoken to NoteMachine about this and will be meeting their Chief Executive soon to urge them to rethink their approach. Not only is it unfair for people to have to pay to get their own money, the way NoteMachine is rolling this change out is all wrong. By charging for less used cash machines, rural areas like the Borders will inevitably be hit first.

“While habits are changing, rural communities still need access to cash and the loss of free ATMs can have a big blow on local businesses.

“As I’ve said before, I also think it’s time the UK Government steps in to see what it can do to help protect access to cash, particularly in rural areas like the Borders.”

Free to use NoteMachine ATMs currently in the Scottish Borders can be found at: