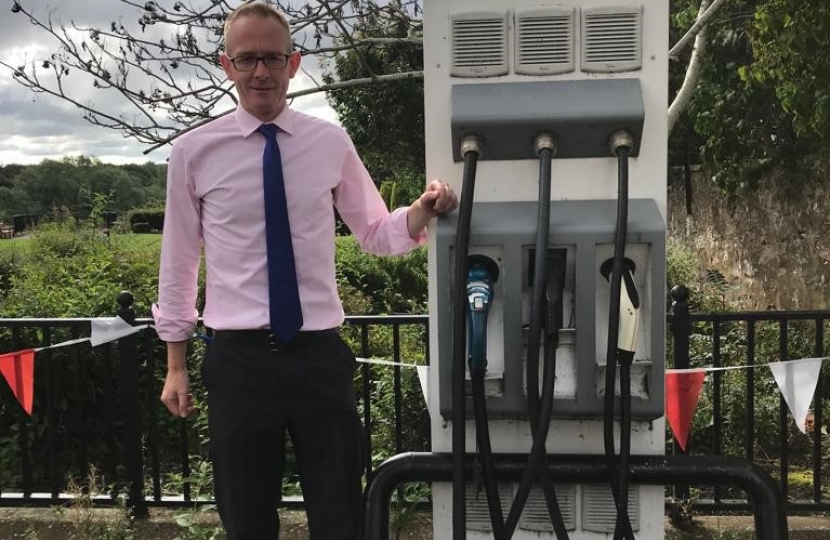 The UK Government has committed to phasing out the sale of new diesel and petrol cars by 2040 in a shift towards electric cars.

While most charging will be done at home, research suggests the UK will need ten times the current provision of public electric car charging points by 2030. Official figures from the European Alternative Fuels Observatory also show that while the UK has 133 fast public charging points per 100km of road network, Norway has around 600.

A lack of charging, or even a perceived lack of charging is the biggest barrier to electric car ownership. This so-called “range anxiety” is even more important in rural areas, where further distances are covered and where charging points are typically less common.

The UK and Scottish Government are already taking steps to improve provision of electric charging points, including an extra £2.5 million from the UK Government for local authorities to install charging on residential roads. However local MP John Lamont has called for this to be accelerated and for greater funding for rural areas.

The campaign also calls for electric vehicle owners to be able to easily access any private charge points. At the moment, a number of private companies offer charging points and require drivers to sign up to individual subscription services. The UK Government has the power to compel these companies to offer a uniform payment system, as happens with petrol stations.

John Lamont MP said: “We all know how important it is to reduce transport emissions, but this move away from diesel and petrol cars is only going to be possible if we have the infrastructure to support it.

“People I speak to in the Borders are reluctant to switch because they are concerned about how they will be able to quickly and easily charge their cars on longer journeys. This is particularly an issue in rural areas where journeys are longer and the distances between places where you can charge a car will inevitably be longer.

“We are seeing more and more charging points going up, but independent research suggests that we need ten times as many in the next few years, so clearly this effort needs to continue at pace.

“That is why I am launching my new campaign to ‘electrify the countryside’. I’m calling on both the UK and Scottish Governments to boost investment in charging infrastructure so that people in rural areas like the Borders can have the confidence to make the switch to electric cars.

John added: “We should also be looking at ending the unhelpful system we have at the moment where many individual charging points have their own subscription system. We need to make it as easy as possible for motorists to charge their cars. Introducing a uniform payment system, just as we have for petrol stations at the moment, would be a step in the right direction.”

Both the UK and Scottish Governments acknowledge that we are facing a global climate emergency and that significant and rapid action is needed to protect our planet for future generations. There is no doubt that climate change is one of the most profound global challenges we face.