Calls for more police officers for the Borders 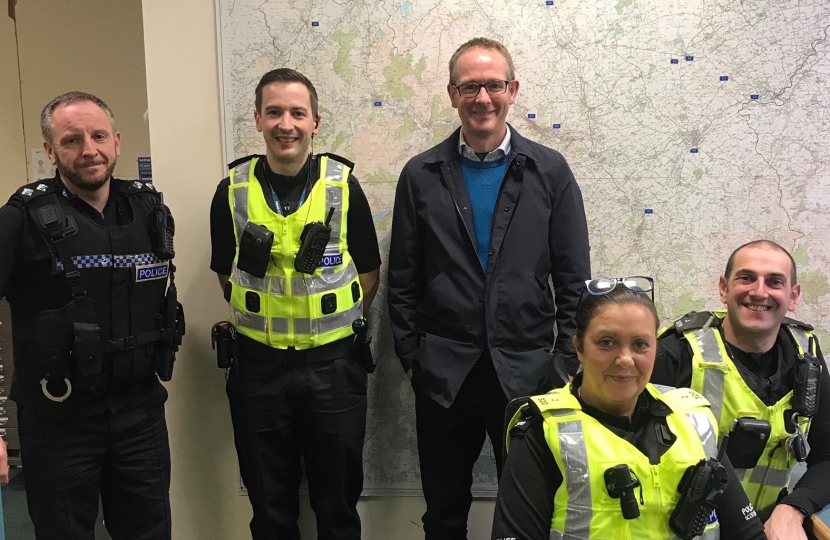 Local MP John Lamont is calling for more police officers for the Borders after joining the Hawick Community Policing Team on the beat.

The visit was part of the ‘Give a Day to Policing’ initiative which sees MPs and MSPs joining police across Scotland to gain some first-hand experience of the job.

The visit comes as the Home Secretary has announced that 6,000 additional officers will be recruited by the end of 2020-21, funded with an additional £750 million. This will mean the Scottish Government receives around £75m in additional funding.

Following the visit, John has called for the Scottish Government to use this additional funding to increase the number of frontline officers, as shock figures recently showed a 7% rise in recorded crime in the Scottish Borders.

John Lamont MP said: “It was really useful to spend some time with local officers in Hawick and speak to them about their work and the challenges which come with policing at the moment.

“I am really grateful to local officers for giving me this useful glimpse into the realities of local policing. With crime rates starting to creep up again, we are going to have to look at whether local policing teams have the resources they need and whether the wider justice system is working.

“Officers across Scotland make a huge contribution to our local communities, helping keep people safe and tackling crime all year round. It is absolutely vital that they have the support they need to do this important job.

“The Scottish Government needs to ensure that the extra £75 million they are set to receive thanks to the increase in police numbers in England is used to ensure we have more bobbies on the beat in rural communities like the Scottish Borders.”