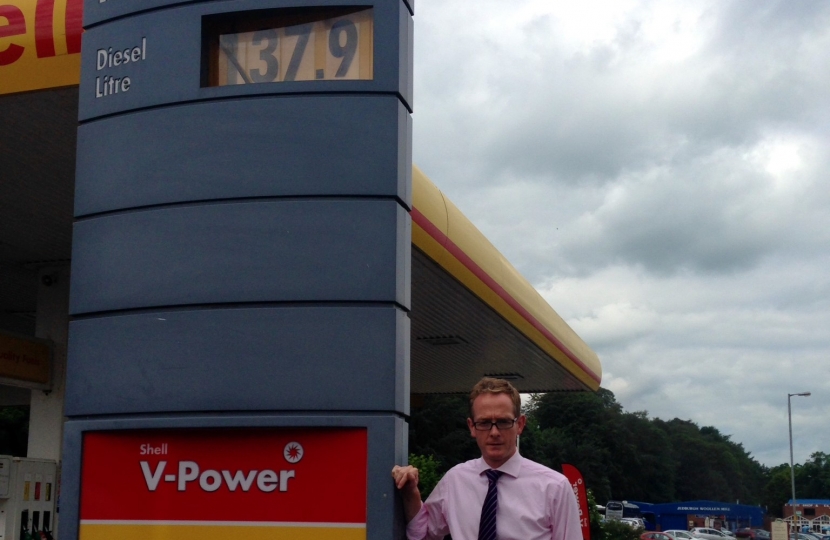 Local MP John Lamont has joined calls for an independent price watchdog to be set up for petrol and diesel to tackle rip off prices in the Scottish Borders.

Petrol prices have been up and down in recent months, but remain significantly higher in the Scottish Borders compared to Midlothian and Edinburgh. Motoring experts have also accused petrol wholesalers of being too quick to increase prices when the cost of oil rises, but failing to pass on reductions in oil prices.

Now a petition calling for an independent pricing watchdog for fuel to stop this inconsistency has received 10,000 signatures. The move would bring the industry in line with gas, electricity, water and telecoms who all have pricing bodies.

The petition states “When oil prices change, UK drivers have absolutely no idea what they will pay at the pumps. It is never ever the same! There is no consistency, logic or clarity to the way prices are calculated. If gas, electricity, water & telecoms get pricing bodies, why not motorists too? We need ‘PumpWatch’.”

The news comes after it was revealed earlier on in the year that Borderers were being charged nearly 20% more for their petrol compared to motorists in neighbouring council areas.

John Lamont MP said: “There is a real sense particularly in the Borders that motorists are being taken for a ride. Petrol prices are already up to 20% more than in stations just up the road and when the price of oil rises, petrol prices rocket.

“For many in the Borders, driving is simply a necessity and petrol a significant monthly cost. It’s really important that we make sure that petrol companies and wholesalers are not exploiting motorists, which is why we need a watchdog. Independent petrol retailers are doing their best, but all too often, petrol prices rise like a rocket and fall like a feather and that is simply unfair.

“The UK Government has supported motorists by freezing fuel duty, but I think more needs to be done.

“Other utilities have an independent price regulator to ensure that consumers are not being ripped off. Now is the time to look at introducing one for fuel pumps.

“I would urge anyone who agrees to sign the official UK Parliament petition. If it reaches 100,000 signatures, then it is likely that a debate will follow and Ministers will realise the strength of feeling about this issue.”