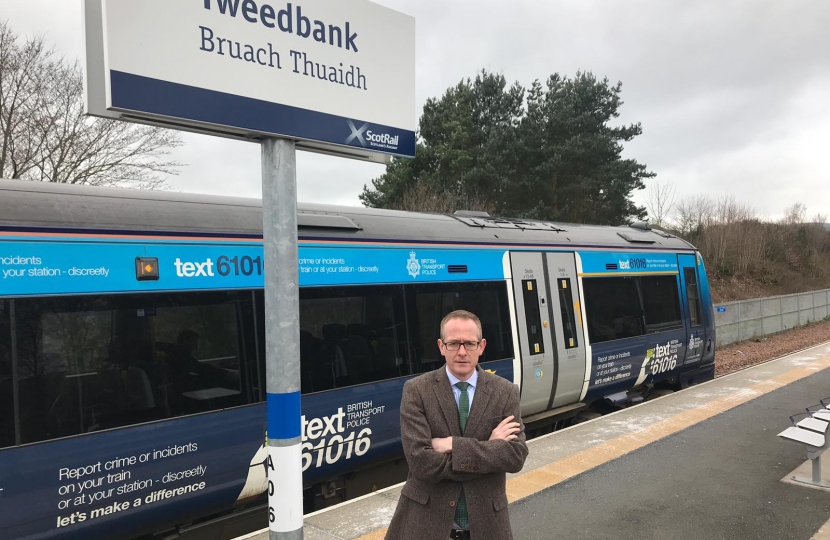 New figures from the Office of Rail and Road (ORR) have shown that more and more people are using Scottish Borders train stations, following a trend since opening in 2015.

They also reveal that Tweedbank is by far the busiest station in the region.

In December 2019, Scotrail announced that they were adding 1,500 extra seats per day to services to and from the Borders in order to alleviate overcrowding concerns. However, they failed to upgrade Stow from an hourly service to a half hourly service, which they had promised at a public meeting earlier in 2019.

The estimates provided by the ORR, an independent government organisation, are largely based on ticket sales.

Local MP, John Lamont, has welcomed the figures as another boost for the case for extending the railway to Hawick and then onto Newcastleton and Carlisle. A £10m feasibility study into an extension was announced last year as part of the Borderlands Growth Deal.

Commenting John Lamont MP said: “More and more Borderers seem to be using the railway which is great news for our environment and for reducing congestion on our roads.

“Tweedbank has by far the largest usage figures with almost 450,000 entries and exits. I know that for many people living in the southern Borders this is their closest station so this is no surprise. However, this shows that there is a definite need for an extension of the Borders Railway to Hawick and then onto Newcastleton and Carlisle.

“I am pressing ministers at a UK level to ensure that the extension of the railway remains at the top of the pile.”

Gigabit broadband rolled out across Scotland

Almost half a million premises, including tens of thousands across Scotland, now have access to gigabit connectivity thanks to UK Government investment.