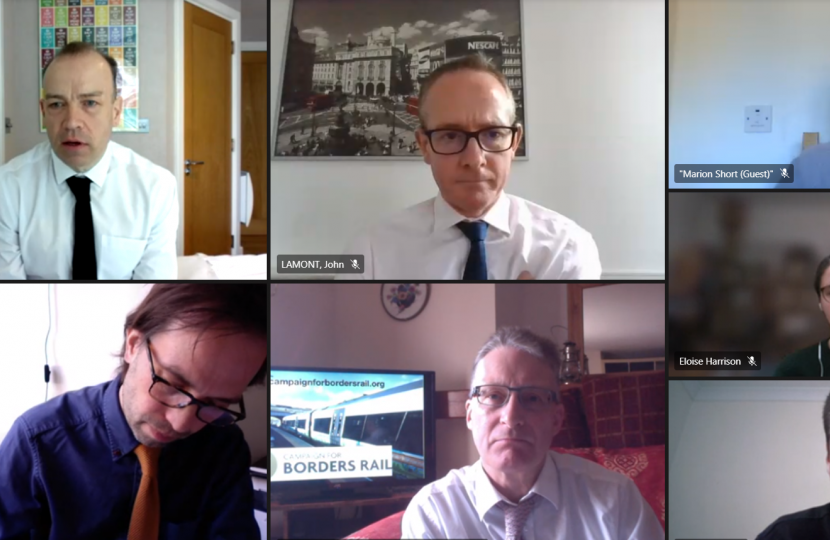 The Campaign for Borders Rail met with UK rail minister, Chris Heaton-Harris MP, this week to discuss the full completion of the line through Hawick, Newcastleton and onto Carlisle.

The campaigners were joined by Borders MP, John Lamont, who had facilitated the meeting.

They discussed the positive benefits of extending the railway including improving connectivity and boosting the economy whilst helping to make Borders travel more environmentally sustainable.

The Borderlands Growth Deal was signed a few weeks ago which committed to a feasibility study into the extension, supported with £10m from the UK and Scottish Governments.

“The Campaign for Borders Rail run a very professional operation and the minister was clearly very impressed with their work and the points they raised in the meeting.

“This was a great opportunity for the team to highlight their campaign directly with the railways minister.

“Like them, I want to see the completion of the Borders Railway, extending the current line from Tweedbank all the way to Carlisle, via Hawick and Newcastleton.

“This has the power to be truly transformational for southern Borders towns like Hawick who have been overlooked by existing transport infrastructure.”

Campaign chair, Simon Walton, thanked both the Minister for his time and attention, and Mr Lamont for proposing the meeting:

“Myself, vice chair Marion Short, and secretary Nick Bethune had a productive meeting with the UK Minister of State for Railways.

"Chris Heaton-Harris came to the table very well briefed on the Campaign and the issues facing the Borderlands in general.

“We were in agreement with the Minister that extension of the railway can answer many of the challenges faced by communities in the region, and help the Borderlands better express its potential for economic growth, social inclusion and environmental sustainability.

“Chris came across as widely experienced and understood the part the railway can play in the wider economic recovery of the UK in general. The project is, in his words, in a good place.

“I take that as encouragement that the message is being received. I look forward to further dialogue with the Minister, and with decision makers in London and Edinburgh. I remain as confident as ever that we are nearing a positive outcome for our railway, our communities and the Borderlands at large.”