Borders MP meets with US Ambassador on textile tariffs 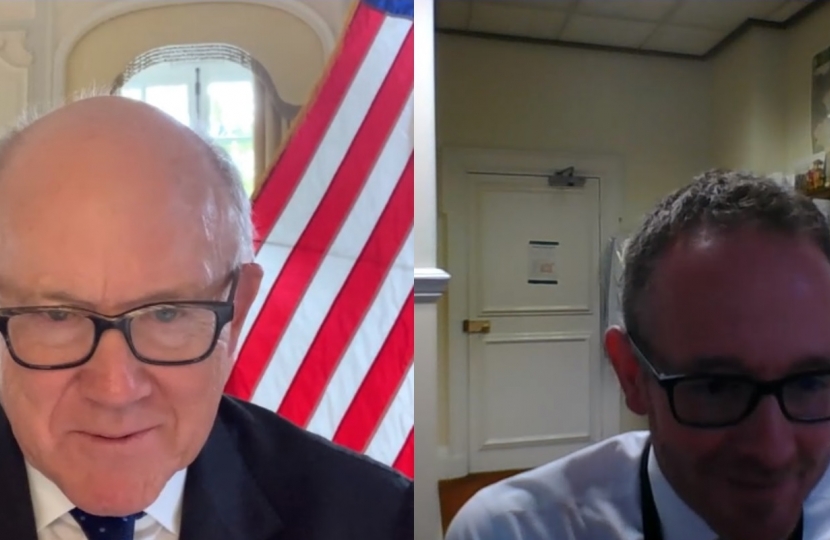 John Lamont MP has met over video call with United States Ambassador to the UK, Woody Johnson, to discuss the challenges posed by tariffs on exports from textiles firms in the Scottish Borders.

The US continues to apply tariffs on British exports as part of a trade dispute between the EU and the USA.

The tariffs see an effective 25% tax for Scottish textiles being purchased in the US market which reduces profits and sales and increases prices.

Other products affected include Scotch single malt whisky. Shortbread was also affected but tariffs have since been removed as part of negotiations between the UK and the USA.

Mr Lamont has repeatedly called for the US to remove tariffs on textiles to help businesses sell their sought after products in the States. He has also invited Woody Johnson to visit the mills in the Borders to discuss the issue with textile bosses.

John Lamont MP said: “I am very grateful to the US Ambassador for taking the time to meet with me about this hugely important issue for textile mills in Hawick and the wider Borders.

“Textile bosses have made their case very clear to me. They have explained in no uncertain terms what the continuation of these tariffs means for sales to the US, and ultimately the economy and job.

“I am glad that Ambassador Johnson recognises the difficulties this is causing businesses in the Borders. He also acknowledged the challenges it poses to products such as Kentucky Bourbon, underlining the mutual benefit of removing these tariffs.

“I hope that the Ambassador takes me up on my offer to visit the Borders to see for himself the damage these tariffs are causing to the textiles trade.”

A new financial support package for Scottish fishing businesses that export to the EU has been announced by the UK Government.

Borders MP, John Lamont, recently called for a compensation scheme in the House of Commons due to issues faced by Berwickshire businesses.