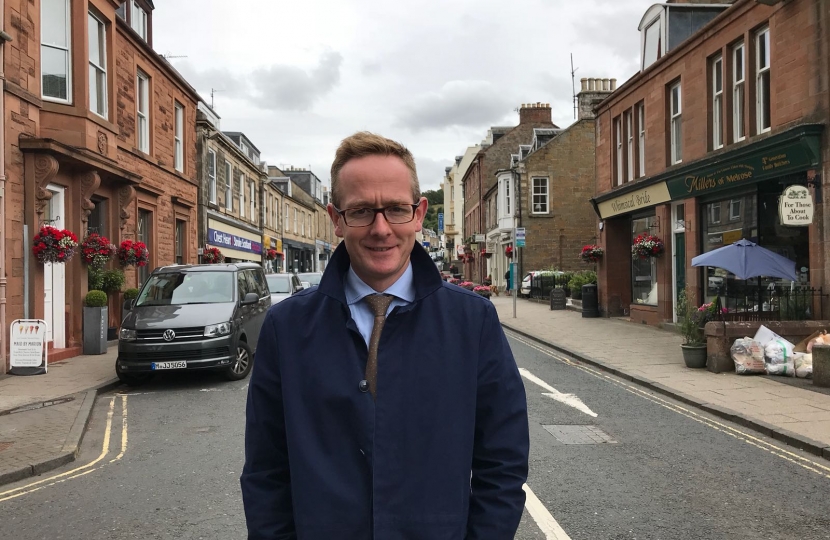 The Border Weaver bus, route 964, has been saved after being earmarked for cuts to the service. The Scottish Conservative led administration at Scottish Borders Council have pledged to continue to fund the full service in their proposed draft budget for 2020/21.

It was proposed that the Border Weaver would operate on a reduced timetable as well as no longer serve Gattonside.

However, determined locals and local parliamentarians joined the fight to save the service, which is a vital link for people to get to their local town.

Local MP, John Lamont, recently met with a group of locals who highlighted their concerns about the changes and the benefit of the current timetable for vulnerable users and those who use it get to work.

The 128 service from Newcastleton to Hawick is also to be retained at its current level.

Sunday services on some routes were also to be axed. However, route 20 (Kelso – Jedburgh – Hawick), route 61 (Galashiels to Earlston), route 73 (Galashiels to Selkirk), route 235 (Berwick to St Abbs) and route 253 (Berwick to Edinburgh) will see their services continue due to funding in the budget.

Commenting John Lamont MP said: “Buses are lifelines for people in many local communities. People travel for work, education, to do some shopping in their local town, or to attend a hospital appointment.

“After hearing the concerns of local residents who use this bus service, I wrote to Scottish Borders Council highlighting what it would mean for their lives if the bus service was cut.

“It was clear from conversations I had that the proposed changes would hit vulnerable users particularly hard.

“I am absolutely delighted that the Border Weaver and other bus services will be saved. It’s really great that the council have also been able to save these other important routes too despite facing large cuts from the SNP Scottish Government to their budget.”

Rachael Hamilton MSP said: “Bus routes have been in the firing line for many years now due to fewer people using them and budget constraints making them less viable.

“However, they are still absolutely crucial for those who rely on them and are their only mode of transport.

“There was a clear backlash about proposals to cut these services, so I am glad the local authority have listened to the concerns of local people.

Leader of Scottish Borders Council, Cllr Shona Haslam commented: “The Scottish Government budget has increased by 2.8% since 2013, yet they have chosen to cut local government budgets by 3.8% over the same period.

“This unfortunately means that hard decisions have to be made when it comes to setting our budget. However, I can see how much these bus routes mean to those that use them.

“The Administration draft budget therefore proposes that we should keep these services which will help deliver on our promises to our rural communities and help level up opportunities across the Borders.  I hope that this budget is passed by the Council on 26th February and these vital routes will be retained.”