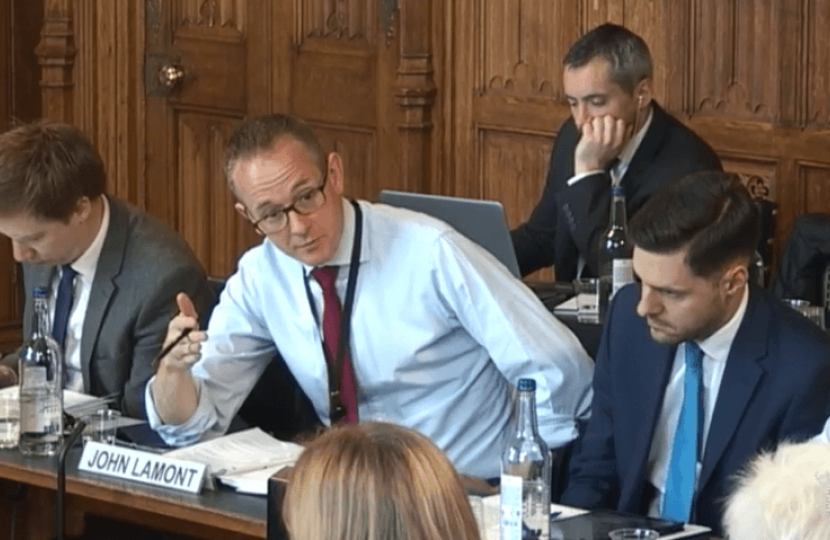 Local MP John Lamont has hit out at bosses of big banks for failing to do their bit to protect their own branches and for misunderstanding their own customers like those in the Scottish Borders.

At a meeting of the Scottish Affairs Committee, senior managers from TSB, RBS, Santander and Bank of Scotland gave evidence on the Committee on access to financial services.

The news comes after bank branch closures across the Borders, most recently from RBS, as well as a recent announcement from TSB that opening times at Hawick, Kelso and Jedburgh will be reduced.

Commenting on the recent reduction by TSB of opening hours for their Hawick, Kelso and Jedburgh branches, John Lamont MP said: “The reality is that other banks have done the same and the conclusion of that process has been closures.”

Carol Anderson, TSB’s Scotland Distribution Manager was unable to provide any examples of banks reducing their opening hours which then did not lead to the closure of the branch. She was also unable to guarantee the future of the Hawick, Jedburgh and Kelso branches beyond the end of the year.

The Federation of Small Businesses Scotland has also criticised the latest round of TSB branch opening hour reductions, saying “this looks like TSB is reducing opening hours in branches up and down Scotland before closing their doors for good.”

John also pressed the banks on alternatives to closing branches, asking: “Why do you automatically decide to close the branch rather than looking at alternative services which might entice people in and increase your numbers?”

The response from the bank bosses was mixed, with some claiming they were trying to offer alternative services, but all saying that with high streets in decline there was little they could do.

Also at the meeting, Susan Allen, Head of Retail and Business Banking at Santander claimed that elderly customers “could very easily” do their banking at home and that the banks had an obligation to offer these alternatives.

John slammed this comment, saying that a physical branch was the preference for many elderly customers. He added: “I think you should be looking after your most vulnerable customers and I would suggest to you that the customers you refer to are people which you owe a much higher duty of care to compared to anybody else who may have other options of banking available to them.”

Speaking afterwards, John Lamont MP said: “These comments just reinforce my view that banks really do not understand the customers and communities they serve, particularly in rural areas.

“I was particularly irritated to hear banks telling us that high streets were dying, when they themselves are one major reason why smaller communities are struggling.

“Access to financial services is becoming increasingly difficult in the Borders and without a change in priorities from the major banks, this trend is going to continue.”